It’s hard to believe we are fast approaching our 1-year anniversary of opening in Louisville.

We are asking for your feedback on everything from referring clients, potential referring concerns, collaborating with Dr. Sarah Clay Bell, DVM, Diplomate, ACVIM (Cardiology) and feedback on sending clients to work with CVCA inside of BluePearl Specialty & Emergency Pet Hospital.

Overall, we want to know if there is anything we can do to improve for you and/or your clients.  All answers will be kept confidential.

We know how difficult it can be for clients when faced with unexpected medical expenses for their pet. CVCA Cardiac Care for Pets has several options to help clients get an early diagnosis and appropriate treatment before advanced stages begin:

Brutus and his family came to see CVCA a few days after their wellness visit with their primary care veterinarian. Physical examination revealed a grade III/VI systolic murmur over the mitral valve along with occasional extra-systolic beats that were likely consistent with ventricular premature contractions. An echocardiogram and EKG were recommended. A CBC, blood chemistry and T4 had already been performed by Brutus’ veterinarian and were completely normal. Echocardiogram revealed early DCM with mild left atrial and ventricular chamber dilation and de creased left ventricular systolic function. Brutus’ EKG revealed single and couplet ventricular premature  beats. Brutus’ family was counseled by the cardiologist of CVCA. Prognosis, a complete medical plan, and a follow-up plan was thoroughly discussed with the family. The latest medical and therapeutic recommendations were dis- cussed of which were all based on current medical literature recommendations. Pimobendan, Benazepril, Spironolactone and Sotalol were initiated in Brutus. Symptoms of congestive heart failure, side effects of all medications,  risks for sudden death, and other potential factors were all discussed with the family. A follow-up EKG and blood chemistry were recommended to be performed at the primary care practice and a Holter monitor was recommended to determine 24-hour global control of Brutus’ potentially life threatening ventricular arrhythmia.

Sinbad received an echocardiogram by a mobile sonographer within a few days after his wellness visit to his primary veterinarian. His diagnosis was the same: early dilated cardiomyopathy. Notations were made by the mobile sonographer that arrhythmias were present during the echocardiogram and that further diagnostics to evaluate these arrhythmias would be prudent. The cardiologist who remotely interpreted Sinbad’s echocardiogram made similar recommendations as well. The cardiologist gave the option to start Pimobendan but noted that he was not yet in congestive heart failure and this drug could be optional. Sinbad was started just on Enalapril and a recheck echocardiogram was recommended in six months. The owners were never counseled as to the potential severity of his DCM and lethality of Sinbad’s arrhythmia.

Sinbad presented 3 months later in January 2015 to one of CVCA’s 24-hour care emergency facilities after having collapsed in the yard. It was reported that he had some minor coughing over the previous few days. Physical examination revealed a heart rate of 280 bpm with coarse lung sounds on the right.  An EKG showed aggressive ventricular tachycardia with a rate of 280 bpm. Sinbad was hospitalized to treat his ventricular tachycardia and acutely worsening heart failure due to his extreme tachycardia. Sadly, Sinbad suffered cardiac arrest within 30 minutes of presentation.  The CVCA cardiologist met with the family and discussed what had transpired. The owners asked if anything could have been done differently to help Sinbad to have avoided this tragic situation. They were now aware of the severity of his initial disease diagnosis and did not even know he had been diagnosed with an arrhythmia previously.

Brutus represented to his veterinarian for a follow-up EKG 2 weeks later. The ventricular 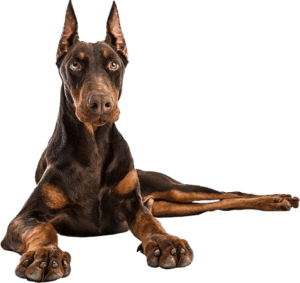 arrhythmias appeared improved and he was in a normal sinus rhythm. A Holter monitor was performed 2 weeks later that unfortunately demonstrated persistent short runs of ventricular tachycardia during activity.  Mexiletene was added into his anti-arrhythmia regimen.

Brutus returned to CVCA earlier in March 2015 for a recheck. His echocardiographic changes were quite stable and his rhythm was judged to be well controlled as well. The owners were very pleased with his quality of life and profusely thanked their veterinarian for having found his original physical examination issues and his prompt referral of Brutus to CVCA. Brutus’ family was counseled again on symptoms to monitor for in regard to congestive heart failure. They understood despite Brutus’ stability that problems could still happen. They were advised of CVCA’s 24/7 availability for phone consultations after hours should problems arise during non-business hours. Brutus continues to do well and hopefully will continue on this stable path with the continued guidance of CVCA and his primary care veterinarian.

Certainly, some aspects of heart disease are out of the control of all humans regardless of their expertise and all dogs and cats with heart disease do often have different outcomes despite similar therapies. The benefits of in person evaluation by a board certified cardiologist include a complete cardiac physical, review, and interpretation of pertinent medical history, radiographs and lab work, and correct technique and interpretation of the echocardiogram. Additionally, clients are present during the echocardiogram to help them fully understand the disease process and reasons for treatment. CVCA doctors are committed to working with the primary care veterinarian of all of our mutual patients to continue to ensure that the pet is appropriately managed. To provide the absolute best outcome for heart disease dogs and cats, prompt referral to a cardiologist will provide the best possible results for you and your patients.

Visit the CVCA Cardiac Care for Pets at the KVMA!  And, make sure to drop into one of four lectures Dr. Sarah Clay Bell, DVM, Diplomate, ACVIM (Cardiology) will be doing at KVMA